Kardamili (Greek: Καρδαμύλη, variously transliterated as Kardamyle, Cardamyle, Kardhamili, and Kardamyli, and sometimes called “Skardamoula”, especially on old maps) is a town by the sea thirty-five kilometers southeast of Kalamata. It is the seat of the municipality of Lefktro in the region of Messenia on the Mani Peninsula.

In the Iliad (Book 9 [2]), Homer cites Kardamili as one of the seven cities offered by Agamemnon to Achilles as a condition to rejoin the fight during the Trojan War. The village preserves its ancient name.

The area is filled with beaches: Ritsa, Belogianni, Salio, Tikla, Amoni, Santava. The older town includes a mediaeval castle and outworks, and the imposing church of Saint Spyridon. Many of the buildings of Old Kardamili, also known as “Pano Kardamili”, or “Upper Kardamili” were built by the Venetians and feature a mix of traditional Greek and Venetian design. The skyline of Kardamyli, like many other Maniot towns and villages, is dominated by the distinctive regional architectural of the various towers built by scions of the Nikliani clans, the mediaeval aristocracy of the Mani.

Kardamyli is the departure point of many mountain trails, some of which lead to the peak of Mount Taygetus. Kardamili is known in the area for having an especially good view of Mount Taygetus, known locally as the “Profitis Ilias”, literally translating to “Prophet Elias”. Nearby is the Viros Gorge, with a total length of 20 km. The Viros Gorge remains bone dry in summer, however it is known to flood heavily in winter, when snow melts on the mountains and rain falls in heavy downpours. Further afield, one may visit Oitylo, Areopoli and the Diros caverns.

The village of Kalamitsi, just outside Kardamili was, in his later years, the principal home of Patrick Leigh Fermor and his wife Joan. Patrick was an English writer who was made an honorary citizen of the village for his participation in the Greek Resistance during World War II, especially in Crete. He died in hospital in 2011 the day after returning to his other home in Dumbleton in England.

The ashes of the writer Bruce Chatwin were scattered near a Byzantine chapel above the village in 1989.

Kardamili sits at the foot of the Taygetus mountains on the coast of the Messenian Bay. Much of the town sits on the remnants of a prehistoric lava flow, the remains of which can be seen as the lava rock outcrops which separate many of the local beaches from one another. The local beaches stand out from those in other areas of the world for the remarkably round stones of which they are made up. Nowhere else in the world is it possible to find smooth, often spherical stones on a beach, and the phenomenon has been subject to multiple studies done to find the cause of such a unique occurrence.[needs citation] The nearest places are Kampos to the North and Proastio to the southeast.

Kardamili is one of the oldest settlements in the Peloponnese, with its current name being mentioned in the Iliad, the epic poem by ancient Greek writer Homer. Many of the townspeople can trace their lineage back to either famed clans of the area (as in the Mourtzinos and Troupakis clans), or the Byzantine Emperor Constantine Palaiologos, one of whose descendants (Dimitri Palaiologos) settled in the region. The descendants of Dimitris Palaiologos typically have the last name “Dimitreas”, meaning “son of Dimitri’. 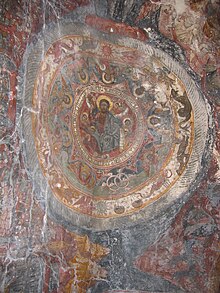 The dome of the Byzantine-Era Church of Eisodia

Thank you for your honest reviews!
If it's your 1st time here read what visitors wrote about us.